Namsoyoo is believed by most to be the most beautiful woman in Bamboo Village and beloved by all of the villagers as a kind, benevolent soul. Her family includes her adoptive father, Dochun, and his son, Dodan. The monks at Stillbrook Monastery recall that despite all their teachings of leading a peaceful, simplistic life, she still spent a great deal wishing for a more adventurous life.

Namsoyoo was born to late Stratus Emperor Wan and Empress Namsolyn as Sup Soyoo. Dochun, during his time as Stratus Royal Bodyguard, rescued baby Namsoyoo from the burning Stratus Haven Annex building during an assassination attempt on the royal Stratus family by the mysterious Ebondrake Cultist assassins.

Fearing for the baby's safety, Dochun faked Namsoyoo's death and took her to Stillbrook Monastery to be raised by the monks there before he could formally adopt her. Dochun raised her as his own alongside his biological son Dodan in Bamboo Village.

Fearful that Namsoyoo would leave him and that her discovery may lead to another attempt on her life, he never told her of her royal heritage. Even so, she blossoms into a beautiful young woman, pined after by many men, young and old. Though she lacks for nothing, she is unhappy with her simple, village life and wishes for more exciting adventure.

More and more, she began to feel alienated as she feels she cannot be understood by anyone in the village. When Dochun managed to capture Blackram Captain Gwon, she immediately connected with him and saw her way out of the idyllic village life.

After that initial meeting with Gwon, Namsoyoo begins consorting with the Bamboo Guard's most feared enemies, the Blackram Marauders, telling them all sorts of information on how to infiltrate Bamboo Village. Gwon promises her the life of an Empress and she promises to marry him in return. She uses her seductive charm to fool the Mayor of Bamboo Village, Daygu, into providing her all the necessary things for the Blackram Marauders to successfully destroy Bamboo Village.

On Gwon's ship however, she feels cheated and disillusioned as the life she thought she would have with Gwon was far from the luxurious life she imagined for herself. Jinsoyun appears with her lackeys on board the Blackram ship, promising to make Namsoyoo an Empress. She eagerly agrees and leaves Gwon for dead. 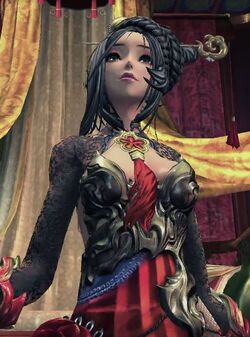 In the Talus Capitol, Zaiwei, she is finally living the life she wants, adored by all of her handmaidens and standing beside the false Emperor as Royal Concubine. When the hero appears at the Royal Martial Arts Championship to decide the new bodyguard for the royal family, she immediately sends the hero a special set of rules, stressing that she would not hesitate to send them to the dungeon should they reveal her previous life in Bamboo Village. She also expresses that she understands that the hero doesn't like her but that she simply wants to live a comfortable life. Despite all of her betrayals, Dochun arrives as a competitor, hoping to gain an audience with Namsoyoo to talk sense into her. When he runs up to speak with her despite losing to the hero, she is surprised to see him but demands he be arrested anyway.

As the hero prepares to make their initial attempt on Jinsoyun's life, they ask why Dochun cares so much about a girl who has only caused trouble for him. Dochun explains that he sees Namsoyoo as his own daughter and refuses to give up on her. 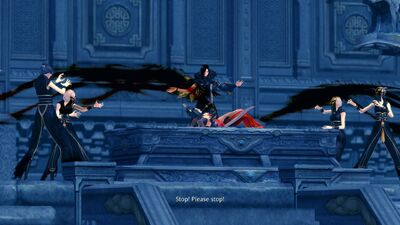 Namsoyoo as the royal blood sacrifice for the Divine Mandate Ritual.

On the day of the Divine Mandate Ritual, she discovers the true reason for being brought to the capitol. She is Jinsoyun's royal blood sacrifice for the ritual as she is the last of the Stratus Emperor's line. She is chained down upon the Sacred Altar and impaled by the Twilight's Edge.

As the ritual is completed, Jinsoyun removes the blade, supposedly killing her. Her lifeless body is sent swirling into the winds and disappears to an unknown location. After Jinsoyun's defeat, Dochun sets out to search for both the hero and Namsoyoo. During his search, he discovers mentions of the Ebondrake Cult's movements. Gubong affirms his fears that they must be in search of Namsoyoo as well.

Act 1: Into the Woods[edit | edit source] 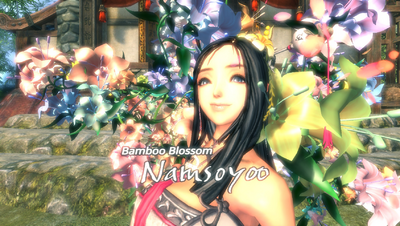