The Highland Necropolis is a city inhabited by the undead and demons, teeming with Dark Chi emanating from the Sealed Palace. The gateway to the city is closed off and closely guarded by the Snapjaw Tribe to prevent the darkness from spreading outside of the city.

Previously, the city was known as Highland Central, a central hub of the southern Eastern Continent and home to Prince Sogun and Princess Solaan. Thirty years prior, the Prince Sogun attempted to perform the Divine Mandate Ritual in order to become the next Stratus Emperor. However, the ritual was incorrectly performed, opening a gate to the Dark Realm. The Sacred Beasts of the Moonwater Plains arrived to fight the darkness while Stratus Director General Doyung attempts to rescue the citizens. The city quickly became a lost cause and the plan turned to keeping the Dark Chi contained to the city. All infected citizens and soldiers were swiftly killed and travel outside the city was closed off. By the time the Four Guardians arrived, all that could be done was to seal the darkness away into the Highland Palace. It would still periodically trickle Dark Chi into the city which the Snapjaw Tribe would perpetually have to fight off.

Many lost and undead souls still wander the Necropolis along with creatures created by the Dark Chi. Anything within the city becomes corrupted from spiders and scorpions, to bats and Soul Wardens who enter the city to help. Even normal objects like swords, plates, and books turn into creatures called Dokkaebi.

The hero manages to quell a large part of the darkness by freeing General Doyung's soul. 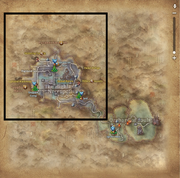 The marked off area is the Highland Necropolis which is separate from the Orchard of Souls.
Retrieved from "https://bladeandsoul.fandom.com/wiki/Highland_Necropolis?oldid=86555"