A brief overview of the basic controls in Blade and Soul. All keybinds can be changed in Options.

By default, WASD keys are used for movement and the mouse to used to move the camera. The middle mouse button is used to zoom in and out.

Interacting with the World[]

By default, F is the key used to interact with objects and to talk to non player characters. 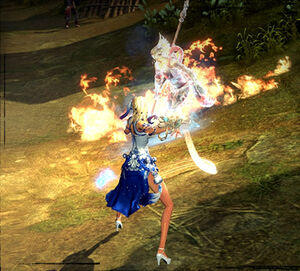 Blade and Soul utilizes an action combat system to immerse players into the game.

Players need to face their opponent in order for their attacks to hit. Some skills have a ranged impact, where everyone's who's standing in front of the player will be damaged as long as they are within range.

Other abilities require a target to use, and usually the opponent that’s directly in front of the player and within range of your abilities will be targeted. When targeting someone, the cross hair cursor snaps to the target, and their information appears on the top of the screen.

The combat in Blade & Soul is dependent on the player's actions and reaction, and many of the martial abilities are triggered upon certain events. The action bar at the bottom of the screen shows the skills you have available in general situations; however, these skill bars are dynamic and will shift to display abilities that are available to take advantage of a given situation.

For example, if a player is knocked down, their skill options might change to a give them a number of different abilities that allow them to jump back up into the battle or escape from the situation. However, these are time based and players must respond in time in order to utilize these skills.

By chaining together abilities quickly, a combo can used to attack an opponent.