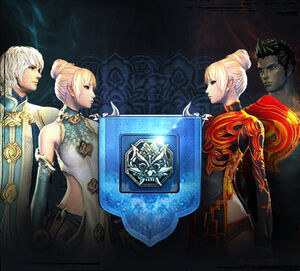 Clans are large social groups in Blade & Soul, allowing players to band together to achieve greatness, defend their ideals, and seek out adventure and rewards. A clan must be aligned to either the Cerulean Order or Crimson Legion; in other words, everyone in the Clan must have joined the same faction. No unaligned martial artists allowed! If players wish to join a clan that belongs to another faction than what they originally chose, they have the option of transferring their faction alignment (assuming the other faction is accepting new members). This will cost a small fee and gained Faction Rank. There are many benefits to being a member of a clan.

The clan system is split into two sections.

In order to create a clan, the player must submit a proposal to a Faction Clan Supervisor. This proposal will include a clan name that meets their requirements and an application fee. The requirements for the clan name are:

Those looking for a clan will be able to search through existing clans via the Dragonspire, and from there, be able to contact a clan member for an invitation. Only those who have received an invitation can join. Invitations are only able to be sent by Clan Elders (by default) and above.