Difference between revisions of "Blade Master" 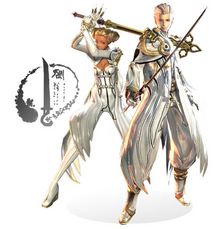 This class specializes in sword combat to deliver a variety of attacks. Using their sword, they utilize skills like the "Batto Jutsu" technique to attack or defend against their enemies. Blade Masters are quite good at parrying their enemies' blows, leaving them vulnerable to effective counter attacks. They don't always rely on close combat to bring their enemies down; they can use a flying sword technique that will harm their enemies from afar.

The Blade Master is a 'Warrior' class. But instead of face tanking like Destroyers, Blade Masters avoid damage by evading or parrying enemy attacks. The Blade Master then responds by attacking his/her opponents' weak points. Blade Masters use the Sword Chi to block or evade melee attacks, or they can also go on the offensive and thrust their opponents with great force.

This class has race limitations and can only be played with the following playable races: the Jin, the Kun, and the Lyn.

Blade Masters use a resource mechanic called "Sword Chi" to call forth their abilities and combos. A point is added to the Blade Master's Sword Chi bar every time a basic combo or move is used. The larger, more complicated moves will require a certain amount of Sword Chi points to perform and will consume the Sword Chi points upon use.

Keep in mind that the name of this resource mechanic is an unofficial translation and may be named something completely different in the other regions' retail versions.

The following list is incomplete. These are just a few of the currently known Blade Master abilities, we will continue to update the list as more information is provided. These abilities are also unofficial translations of Blade & Soul's Korean G-Star 2010 playable demo; official translations may vary.